These Chess Pieces are crafted, with really fine turning and good carving with nice detail, the Pawns are very unsual than most of the "St.George" Set i have seen so far.
Named after the St.George's Chess Club in London who patronized this Style for play in their Club activities, most turners or manufacturers in 19th Century England produced Chessmen in this Style, so there are many variations, materials and quality

One side stained red, other side left natural. Excellent carved Knights Heads and has nice colour and patina. Standard Set of yesteryear, around 1840 – 1860

Thanks to Ine and Mathieu Kloprogge, Netherlands

This elaborate early 1800s English Playing Chess Set design, referred to in the literature as a Calvert Pattern,  is derived from earlier German designs from the 15th through the 19th centuries. It is often, but wrongly, attributed to John Calvert, a Master of the Worshipful Company of Turners, located at 189 Fleet Street, from around 1790 to 1840. He specialized in exquisitely turned Chess sets in ivory for the aristocracy and in ebony/boxwood for the many coffee shops and clubs where Chess was a popular pastime.

Chessmen of this type were actually manufactured throughout the early-to-mid Victorian period by John Jaques of London and Thomas Lund of Cornhill. The Calvert playing sets were ultimately supplanted by the Staunton pattern chessmen, which were introduced to the public in the fall of 1849 by the firm of John Jaques of London.

This reproduction is an exact copy, crafted from faux ivory, of an original Calvert Chess set. It dates from around 1810, at which time white and red colored ivory pieces were popular

Chessmen: Water Buffalo Horn and Bone, Board: Wood and Mother of Pearl

Special thanks to Susan Künzli, Switzerland

Turned of Fruitwood with nice Patina, around 1900

11# Chessmen and Board Selfmade

Portraits of Chess World's Champions since 1886 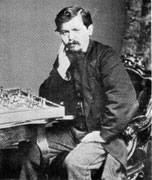 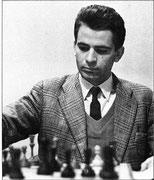